“An average CEO earns more before lunchtime on the very first day of work in the year than a minimum wage worker earns all year” (Economic Policy Institute).

I am reading Ralph Nader’s Crashing the Party: How to Tell the Truth and Still Run for President (about his 2000 run), and I must say I learn a new disturbing tidbit about the State of the Union on nearly every page.  On page 92, Nader is surprised to find Fortune, of all magazines, publishing an article entitled “The Great CEO Pay Heist,” which describes the exploding pay packages of top CEOs.   But you need a narrator like Nader to fill in the context, as the article does nothing to anchor these billions in a relation with what other workers make:

Fortune was referring to the 350 or so of the largest companies by revenues in the U.S. where the average CEO’s compensation has gone from twelve times the entry-level wage in their company in 1940, to forty-two times in 1980, to about five hundred times by the year 2000!

So I started doing my own research to get a handle on this income gap.  According to the Economic Policy Institute:

In 2005, an average Chief Executive Officer (CEO) was paid 821 times as much as a minimum wage earner, who earns just $5.15 per hour. An average CEO earns more before lunchtime on the very first day of work in the year than a minimum wage worker earns all year.

There’s also a handy chart put together by the AFL-CIO (from this Finfacts article) which helps drive home the point:

Needless to say, we need a minimum wage increase.  We also need a way to incentivize a smaller wage gap within a company.  I would propose providing businesses a tax credit that grows in proportion to the decrease in salary “difference factor” between the highest- and lowest-paid positions.  For instance, if a business pays its CEO $50 million and its lowest-paid retail clerk $40,000, that is a “difference factor” of 1,250, meaning the top staffer makes 3,300 times that of the bottom.  We provide the subsidy for factors of 100 and lower.  So the company would have to either bring its CEO salary down to $4 million, or bring the lowest-paid staff to $500,000.  I imagine a company would happily entertain the former. 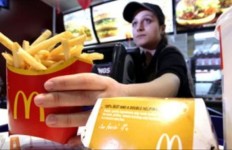