Isn’t it strange that so many working people get assistance from their local food banks? The Greater Boston Food Bank, for instance, reports that about one-third of its recipient households have at least one working adult. Isn’t it also strange that many full-time workers get government welfare checks on top of their paychecks? Thousands of Wal-Mart’s $8-an-hour workers, for example, have been known to receive public assistance in the form of TANF, food stamps, Medicaid, affordable housing, and private charity.

There are many explanations for why working people should be in such a fix. The common refrain from leftist circles is that corporations aggressively low-ball their wages for retail and service jobs. Wal-Mart is the prototypical example. Therefore, honest workers are actually turning to public assistance and charity to make ends meet. Now, how do we turn this upside-down economic picture right-side-up?

This may sound counter-intuitive to those on the left, but suppose we just pulled the plug on public assistance for all able-bodied adults. That means no welfare, no food stamps, no affordable housing, no government-run aid of any kind. That also means no food pantries, no clothing drives, no church- or community-run assistance. Then take all those billions of dollars of resources, and instead use this money to tie a “living-wage subsidy” to anyone making a non-living wage. Roughly put, if a Wal-Mart or any other full-time employee makes, say, $8 per hour, the subsidy will kick in until their pay rate is brought up to $12.

Why would this living-wage subsidy (“LWS” for short) be better than the current battery of assistance programs?

And therein lies the absurdity that is the essence of our charity monstrosity.  In essence, all of this welfare and charity is doing is shoring up what businesses in a capitalist marketplace are not paying out to their hard-working employees.  In this instance, capitalism fails to adequately compensate the lowest rung of the labor force. And by “adequate”, I mean enough wealth to cover the cost of food, housing, clothing, and health care.  And so, we the taxpayers dig in our own pockets to cover the rest.  Meanwhile, big businesses shell out outrageous sums to their CEOs and upper-management.

Switching to the LWS approach may help policy-makers fully grasp the need to provide a minimum wage to ensure that businesses cannot race to the bottom and shirk their responsibility to fair pay for their lowest-paid employees.  As our nation’s Wal-Marts transform into Costcos, we can ditch the living-wage subsidy and the welfare state entirely. 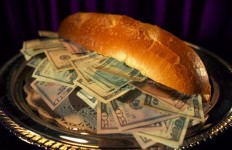